For Halloween, my little girl wanted to be an Ewok!

I am so proud; my three-year-old loves Star Wars!!  My husband on the other hand, not so much.  He already told me that he would watch the girls so that I could watch the new Star Wars movie in the theater.  Anyway, back to my little girl, she said: “Mama I want to be an Ewu for Halloween!”-(Ewok).  She likes to do the Yub Nub Ewok Happy dance too!  So I looked online for an Ewok costume, and all I found was this.  For $$$ for one night.  I figured I could make one. 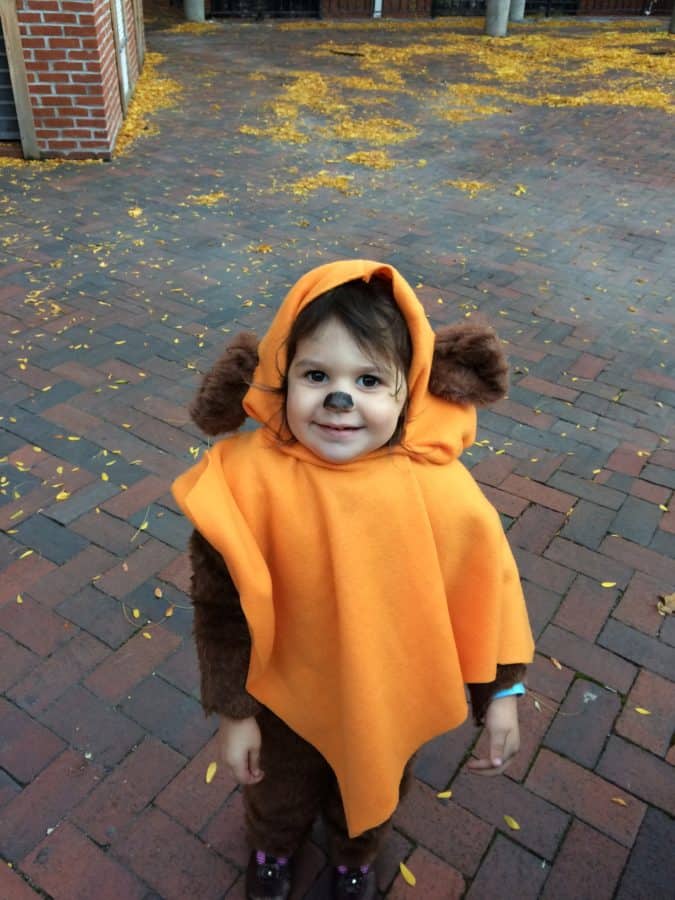 I went to Joann Fabric’s and bought some furry fabric, best part it was on sale, plus I had a 20% off my entire purchase coupon! I also bought some orange fleece, brown thread, and zipper.  I bought the longest zipper possible, as I placed this in the front of the costume…easy access for when she tells me she has to go to the bathroom!

I used one of Isabelle’s Zip-Up PJs for as my pattern.  When cutting the fabric, I cut about two-three inches outside of her pj’s, since she would be wearing clothing underneath her costume, as it would be freezing.  For the hood of her costume, I found one of her jackets that had a hood and again I used this as my pattern.  For the ears, I winged it.  I put into account off the orange fleece that would be laying on top, and I wanted to make sure that you could see the ears.

For my costume, after she told me she wanted to be an Ewok I knew I had to be a Jedi! Finally, I have wanted to dress a Jedi for the longest time!  I mean I had to!  If I didn’t, people would think she was just a teddy bear.  I went all out for my costume.  My tutorial for my Jedi Costume is posted.

When we went trick or treating we had all sorts of people say “Oh my gosh Love your Costume!” and “Oh what a cute little teddy bear”..then they saw my costume..”wait she’s not a teddy bear, she’s an Ewok! What a great costume!” 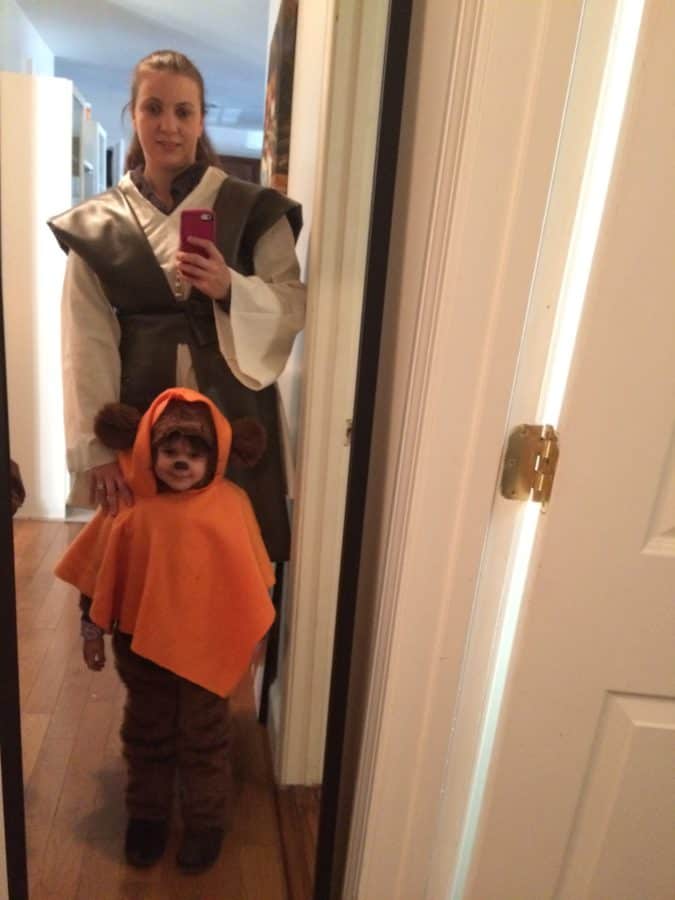 Isabelle and I both loved dressing up.  For Halloween, we were in our costumes all day as there were so many things and places for us to visit and have fun!  Needless to say at the end of the day, she was wiped out and slept great.

I then realized it was Daylight Savings Time..at 6:30 in the morning she came into our bedroom, and the first thing she asked was “Can I have a lollipop?” No, you can come in our bed… 5 minutes later. “I’m so hungry, can I have a lollipop?” You can eat oatmeal or cereal, if you don’t want that then go back to sleep! 25 minutes later… “Can I have breakfast”… “Okay I’m awake you can eat cereal or oatmeal.”

Also, try and check out